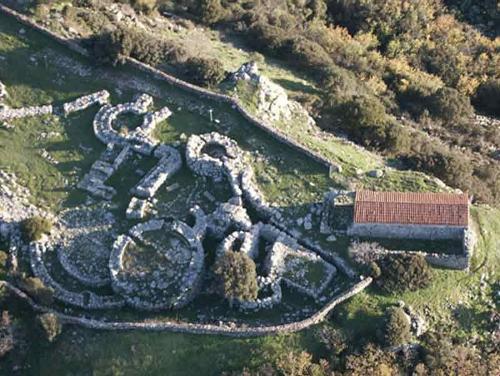 
The magnificent village-sanctuary of Santa Vittoria, named after the near country church, extends to three hectares in the south-west of the Giara plateau. The definition of federal Nuragic sanctuary was given by the famous archaeologist Giovanni Lilliu to indicate a worship place frequented by people from distant villages. Usually dedicated to water cult, these sanctuaries were characterised by different religious buildings (well temple, in antis temple, megaron-style temple). It is believed that the most powerful clans of central Sardinia used to meet here to make alliances or declare war. In common buildings, religious and civil feasts, the market with political meetings coexisted.

The Nuragic village of Santa Vittoria consists of four main areas. The officiant%u2019s hut, the area of feasts, the area of double baetylus and permanent buildings were near the temple; the hut of the chief and the meeting hut were in a separate area. The well temple, ideal centre of the sanctuary, is formed by a vestibule, a stairwell and the chamber (originally with tholos vault) that received water. In the area of feasts, pilgrims could eat and rest for some days. The area of double baetylus (believed to be the divinity%u2019s house) was named after two upright stones stuck into the ground.

The large number of little bronze figurines (the so- called %u201Cbronzetti%u201D) found in this archaeological site testify that Sardinian people- offerers, warriors- used to come here, and ancient and unknown divinities received offerings as animals, weapons and objects of daily use.

The complex dates back to a period between the Late and Final Bronze Age and the Early Iron Age (13th- 8th century BC). It was frequented until the 4th century AD, as Roman tombs attest.

data from the linked data cloud